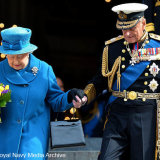 Accrington Camera Club's association with HRH Prince Philip, Duke of Edinburgh, goes back to 1977. It was the year of the Queen's Silver Jubilee and also the year that Prince Philip was president of the World Wildlife Fund, now World Wide Fund for Nature.
Some of the Duke's photographs, taken at Hilbre island in the Dee estuary, were part of an exhibition by the WWF at the time, and one of our committee members Keith Sudders thought it would be a great idea to have them for our own exhibition in honour of the Queen's Jubilee.
Keith wrote off to Buckingham Palace asking if we could feature these prints in our exhibition at the Haworth Art Gallery that summer. Our request and the suitability of the art gallery were subject to careful scrutiny before the answer came back from the Palace - and to our delight the answer was yes. 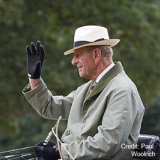 On hearing of our success, Accrington Council thought it a suitable event for local celebration and arranged for the Lord Lieutenant of Lancashire, Lord Hervey Rhodes of Saddleworth, to open our exhibition. During his opening speech he suggested that we invite Prince Philip to become an Honorary Life Member of the club in thanks for loaning his photographs.
We thought that indeed was a nice way to thank the Prince for his generosity and so did just that.
It was still a surprise when, in 2001 to mark HRH's 80th birthday, the Times newspaper published an article listing some of the charities and organisations with which Prince Philip was associated and - as the list was printed in alphabetical order - it was Accrington Camera Club that headed the list. The club was also mentioned in the press in 2007, when the Prince decided to stand down from many of the charitable positions he held.
So the Duke of Edinburgh seems not to have forgotten his life membership of Accrington Camera Club. And we have not forgotten the summer of 1977 when his photographs graced the walls at our club exhibition. RIP Prince Philip.